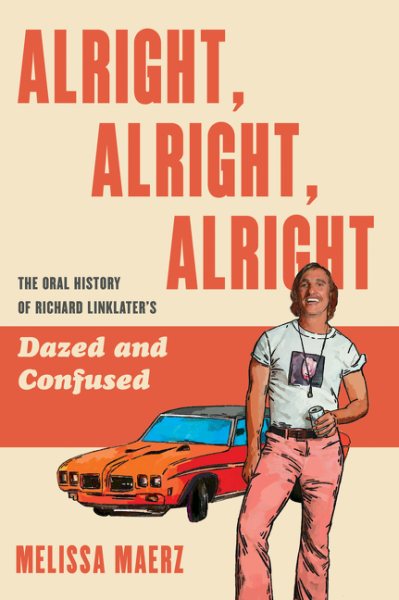 Writer Melissa Maerz stitches together the story of a film that's become a cult classic, Dazed and Confused, through the words of more than 100 people she interviewed for the book. The result is outstanding.

I'm a big fan of books written in the oral history format because the story is told directly by those involved, rather than the occasional quote interspersed with the author's work. Add to that the fact that Dazed and Confused is one of my all-time favorite movies, and we have a book that I was incredibly excited to read. Maerz's book was even better than I hoped for, and is a book I will soon be adding to my own collection.

Dazed – set in a Texas town on the last day of school in 1976 – was director Richard Linklater's first big studio production after his highly regarded indie debut Slacker, filmed in Austin, Texas. It was a pleasant surprise to read more about the making of Slacker in this book because it sets the stage for not only the approach that Linklater took to Dazed, but also sets up the conflict faced by this young, determined director and his close friends (many of whom he brought with him from Slacker to work on Dazed) as he navigated the Hollywood studio process. At its heart, Alright, Alright, Alright is a book about filmmaking in the 1990s, when the last wave of decent-budget independent films reached its high-water mark, when they still had some support from the major studios and before those same studios focused their time and money on remakes, sequels and superheroes. Readers get a behind-the-scenes look at arguments between the film crew and studio executives over the not just the making of the film, but the battles that came after with its soundtrack, marketing and distribution of the film and much more.

At the same time, we also get insight into the camaraderie and summer camp-type atmosphere the actors experienced while making Dazed, told through their own words. The actors all were in their teens and early 20s, and many of them were appearing in their first major film – including future stars Ben Affleck, Matthew McConaughey and Renee Zellweger. (Zellweger has a very small, non-speaking role and the book’s title is McConaughey’s most famous line of the film, and the most famous of his career.) Linklater intentionally took a hands-off approach to their off-screen behavior in hopes they would form a bond with each other and the result was a lot like the high school atmosphere portrayed in the film: romantic hookups, clique drama and intoxication while they weren’t on set (and sometimes when they were!) Linklater also gave these young, relatively inexperienced actors a substantial amount of freedom in shaping their characters and the film's dialogue, which may of them said was a freedom they haven't been given by other directors since Dazed.

Despite Linklater’s attempts to avoid turning Dazed into a nostalgia trip for the 1970s, many of us who grew up in the 1990s saw the film in exactly that light. That makes the ending of the book even more poignant, because Maerz and her subjects speak about ways in which the 1990s are now viewed nostalgically as the right before the crush of cellphones and social media and before the shift in priorities among the major movie studios.

This book hit close to home for me in many ways and brought back some wonderful and awkward memories, and I still learned some new things about a movie I’ve watched dozens of times. I’m so grateful for the tremendous effort Maerz undertook to put this book together.