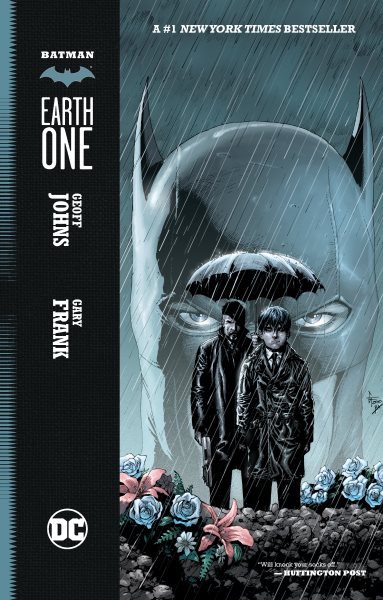 "Batman: Earth One" goes back the beginning of the Batman saga, revisiting and recasting the murder of Bruce Wayne's parents and his eventual development into Batman. While the story remains basically unchanged, the brilliance here is in the details. Writer, Geoff Johns, creates a Gotham riddled with crime and hamstrung by political corruption on all levels. Bruce Wayne's father is in the midst of a mayoral race, but still takes the time to take Bruce and his mother to the movies. When the electricity goes out in the movie, a disappointed Bruce dashes into the alley way, followed by his parents. There Bruce watches his parent's murder. The story, told in flashbacks, shows the development of Bruce into Batman, seeking to discover the secret behind his parent's death.

Johns and Frank introduce us to old character favorites, such as Detective Gordon and his daughter, librarian (and soon to be Batgirl) Barbra. Johns remixes these old characters, giving them new back stories and motivations. His new characters including gung-ho new detective and media celebrity Harvey Bullock and Mayor Cobblespot (who looks a lot like the classic Batman villain The Penguin, right down to his umbrellas and his birds). He even throws in a nod to the most recent "Batman" film franchise by using the character of Fox, the scientist. Probably the biggest change (and to my mind the most interesting character) is Alfred. No longer the steadfast and proper butler, Alfred becomes a military trained guardian the challenges and helps Bruce become Batman.

"Batman: Earth One" is filled with surprises that even the even a die hard Batman fan will find enjoyable. The art is colorful, crisp and neat, displaying a wide range of colors that help suggest the mood of the story. With a new volume coming out this in May, this is a great way to start reading Batman's story or to revisit a classic.