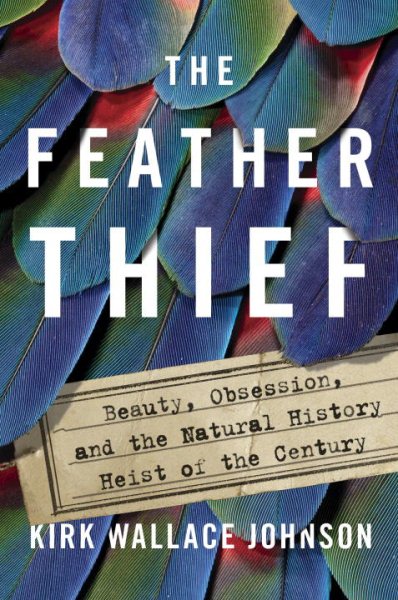 In 2009, 20-year-old American Edwin Rist broke into the Tring museum, a suburban outpost of the British Museum of Natural History. His quest: to steal rare bird specimens - some collected more 150 years earlier - with gorgeous feathers sought the world over by people who shared Edwin's obsession of the Victorian art of salmon fly-tying.

Author Kirk Wallace Johnson's own interest in fly fishing drew him to learn more about Rist's daring caper. But when Johnson first heard the story, he had no idea how it would become his own obsession. Over the course of the story we learn about Rist and how he became a revered fly-tier, his obsession with playing music (that led him to the Royal Academy of Music in England) and many details about the heist and its aftermath. It's not a spoiler to share that Rist was eventually caught and prosecuted for his crime, because there's much more to the story - which I did not expect but kept me interested in the book. Johnson takes the reader with him as he travels the world in pursuit of the truth about what happened to the hundreds of birds stolen by Rist.

The Feather Thief provides a window into the unique world of fly-tying, as well as natural history and scientific inquiry. But it's also an engaging detective story that fans of true crime should enjoy, without blood and guts, because the victims (rare birds) have been dead for decades, if not a century or more.