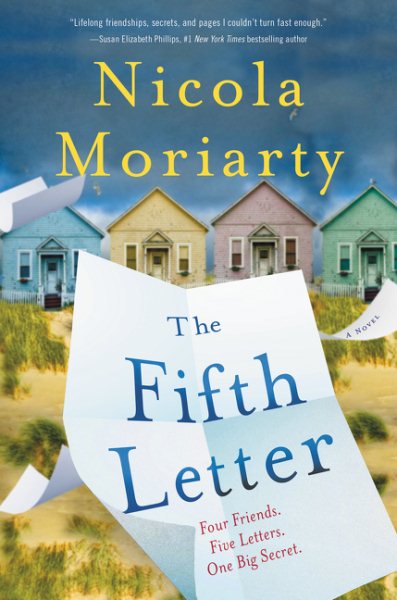 Nicola Moriarty, Liane Moriarty's (Big Little Lies, The Husband's Secret) little sister, makes her writing debut with this secret-filled novel, perfect for fans of Liane's own novels. Joni, Eden, Deb, and Trina have been friends since high school. They get together as often as they can, but family life and careers have gotten in the way. Joni, the only woman without children, seems to be the glue keeping the group together. With some push, Joni organizes a weekend away for the four friends at a small, Australian beach town. After a wine-filled first evening, the friends decide to write letters filled with their darkest secrets, a kind of truth or dare, with an emphasis on the truth. The letters prove to be shocking: someone had a baby in high school without the others knowing, someone has been attending divorce support groups, and someone has a small, harmless crush on another friend's husband. Joni finds a fifth letter burning in the fireplace, one that was never meant to be read. This letter has an even more shattering effect on the group of friends: one woman despises another so much she fantasizes about hurting her and secretly loathes her. Who wrote this fifth letter? Is one of the friends in danger? Joni thinks she knows all of these women and their secrets; turns out, she knows less about her friends than she ever could have imagined. This is Nicola Moriarty's first novel, and that was evident throughout. Her writing style did not flow the best, and the plot wrapped up a little too nicely. However, the premise of the story will keep anyone intrigued. The idea of the novel is great, but how it was written could have been executed better. Recommended for any fans of Liane Moriarty, Emily Giffin, Jessica Knoll, and readers of chick lit.