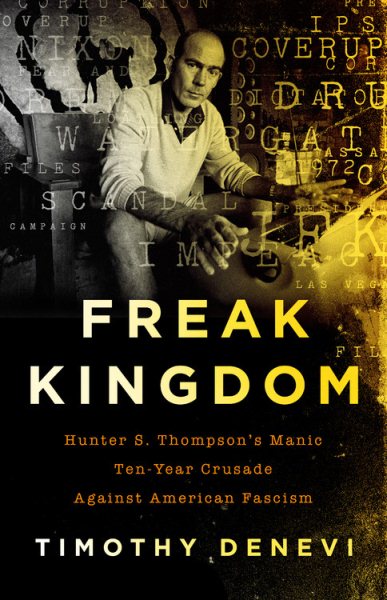 Hunter S. Thompson was an American journalist who wrote for Rolling Stone and other magazines, and is best known for this books Fear and Loathing in Las Vegas and Fear and Loathing on the Campaign Trail '72. He was one of the pioneers of an immersive style of journalism in which he inserted himself into the events around him and included his own insights without regard to the usual standards of "objective" journalism - a style that became known as "Gonzo" journalism.

Collections of Thompson's work, and other books written about him, number in the dozens, but author Timothy Denevi takes a different tack by focusing on what was arguably Thompson's most creative period between 1963-1974. It was during this decade he published his breakthrough work on the Hell's Angels motorcycle gang, his first Gonzo article "The Kentucky Derby is Decadent and Depraved," started a working relationship with Rolling Stone that would continue nearly the rest of his life, covered the murder of journalist Rueben Salazar and the Chicano rights movement in Los Angeles, and the 1968 and 1972 presidential elections.

Denevi excels at putting all of this important work into context by shining a light on the toll it took on Thompson personally - both the strain it caused in his family life, and the physical strain it caused due to Thompson's incessant drug use and lack of sleep he felt was required for his reporting. As the book draws to a close with the early 1970s Watergate proceedings in Washington, we have a clear picture of a man who pushed himself to his mental and physical limits - but in doing so, also may have constrained and limited his future. Though he continued to write for at least two more decades, he was unable to sustain the creative force that made his early work shine so bright.

Freak Kingdom covers quite a bit of familiar ground for readers who are already know about Thompson's life and and have read his work. But even the most enthusiastic and knowledgeable Gonzo fans will find new and interesting insights into this important writer. For those who have yet to dive into Thompson's work, this book provides an excellent introduction to a man who undoubtedly changed American journalism forever.