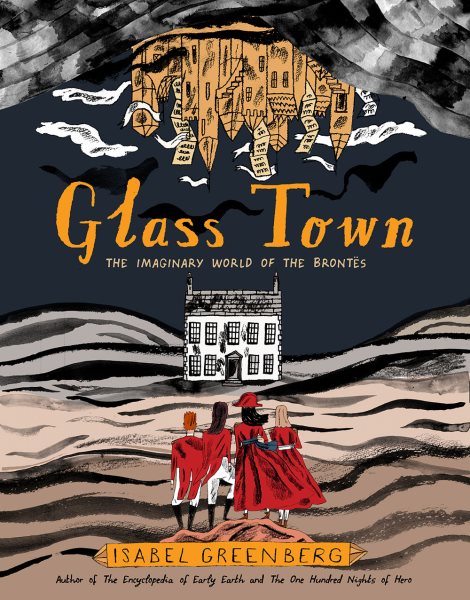 This graphic novel of historical fiction is an excellent blend of fantasy and reality. In the prologue, readers meet Charlotte Brontë in 1849. As the only survivor of her siblings, she is haunted by memories of their make-believe kingdoms Glass Town and Gondal. These memories come in the form of a conversation between Charlotte and her character Charles Wellesley. Together they summarize the dramatic events of the kingdom’s chief characters: Arthur Wellesley, Quashia Quamina, The Duke of Northangerland, Lady Mary Percy, and Lady Zenobia.

It all started when Branwell Brontë received a box of toy soldiers. The siblings immediately created characters and began to shape an imaginary world for them to inhabit. A disagreement about the nature of this fantastic world caused a rift between Charlotte and Branwell’s Glass Town and Emily and Anne’s Gondal. Though Charlotte tries to leave thoughts of Glass Town behind when she goes away to school, she carries it all with her constantly. Wars between the Ashantee and English, the rivalry between Quashia and Arthur, Mary Percy’s feelings for these two step-brothers—these plots all constantly race around in Charlotte’s brain. She eventually loses her grip on reality, which seems to be nothing but long days of darning, French verb conjugating, and dreary Sunday walks with her pupils. At the novel’s climax Charlotte’s characters figure out that they exist only in her imagination. Arthur Wellesley tries to seduce his creator and drag her into Glass Town with him. Charlotte must end the story or be trapped in it forever.

I enjoyed this window into the young adulthood of the Brontës. It especially brings out the fact that characters can feel so real in an author’s mind. Charlotte’s decision near the end to write only about the real world grows out of her desire to leave the fantasy in which she became entangled behind. From her pen we later get Jane Eyre, Villette, and Shirley. Prior knowledge of the Brontës’ story is helpful, but not essential. For those interested in studying it further I recommend the BBC drama To Walk Invisible and the book The Life of Charlotte Brontë by Elizabeth Gaskell.