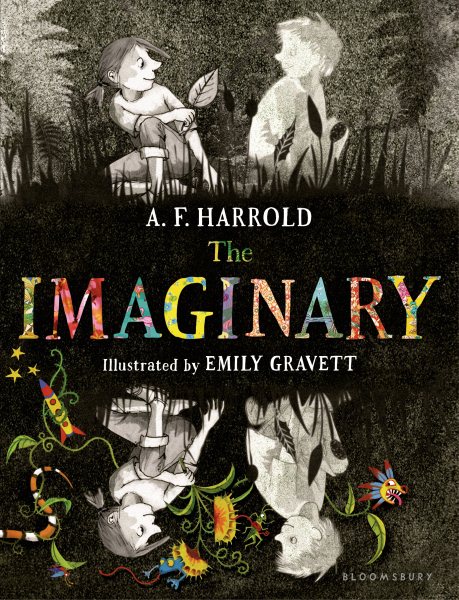 Staff Review: "The Imaginary " by A. F. Harrold, Emily Gravett

A.F. Harrold's book "The Imaginary" opens with Christina Rossetti's poem, "Remember," an eloquent plea for the speaker's beloved to remember her after she has died. While readers might be baffled by the author's choice of this poem, those readers who chose to return to the poem after the book ends, will understand exactly what Rosetti and Harrold meant.

"The Imaginary" opens in the middle of Rudger's fear that his dear friend Amanda might be dead and his sorrowful thoughts on how her death, which means so much to him, means so little to the rest of the world. Then he hears these fateful words: "I can see you." Rudger is lucky to be seen, because he is Amanda's invisible, imaginary friend, which means that without Amanda to imagine and remember him, Rudger will die. After these opening scenes, we get to see how Rudger became Amanda's friend and the accident that is causing her to forget about him. Even before this terrible tragedy, there is a villain lurking in the shadows that Rudger will have to defeat before he can return to his role as Amanda's best friend.

After the accident, Rudger is saved by a cat Zinzan who leads him to the local library where invisible friends go to wait to find another friend. After a series of adventures with some truly horrible children, Rudger ends up at Amanda's side, but not before he has to defeat the monster who eats invisible children in order to remain young.

This is truly a wonderful imaginative book, perfect for reading aloud and sharing with your invisible and visible friends. Harrold imagines the plight of being the invisible friend vividly. For example, even though a place is set at the table and food is on the plate, Rudger doesn't ever get to eat, because Amanda eats his food for him. Rudger also must tolerate people pretending to shake his hand, while they are actually poking him the stomach because they can't see him. In addition, his appearance and gender must change in order to match what each child wants in his or her invisible friend. The illustrations add to the story, but this isn't a picture book. It definitely falls in the illustrated novel category.

Harrold plays with the idea that most children do not remember their invisible friends while their parents do.

All in all this was a delightful book that reminds us that we shouldn't forget our invisible friends. Often they were our first, closest and best friends and they haven't forgotten us.