The Many Faces of Josephine Baker 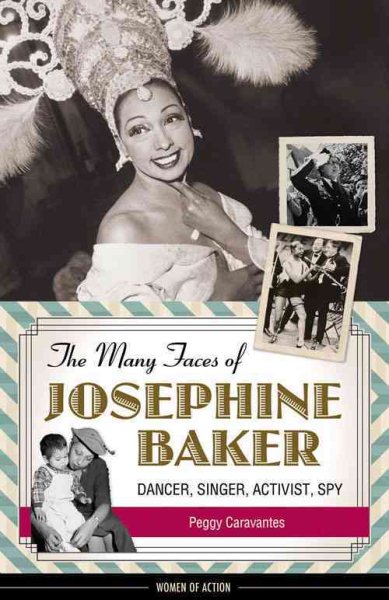 Staff Review: "The Many Faces of Josephine Baker" by Peggy Caravatnes

Most people recognize Josephine Baker as that dancer in the banana skirt.  But Josephine Baker was a far more complex character than can be summarized in one sentence.  Starting life in the poorest slums of East St. Louis, Baker went on to gain international fame dancing and singing on stage and eventually on screen.  An extravagant dresser with a mercurial temperament,  Josephine made friends wherever she went.  She gave away her entire fortune, eventually dying shortly after staging a successful comeback.

By any stretch of the imagination, Baker's life is equal parts fairy tale and hard work.  From starting work at age 7 as a live in maid to leaving home at 13 to pursue a career as a vaudeville dancer to enthralling Paris, the author of this young adult biography reminds the reader that Josephine herself told many different stories of her early childhood, making it difficult to track down her family that remained behind in America and to determine what is the truth and what is less than true.  True, Josephine was married quite young and numerous times.  It's true that she adopted a rainbow tribe of young boys and (eventually) girls from around the world.  It's also true that Josephine worked as a spy for France during the second World War, pinning notes about what she heard at parties she attended with important leaders of the German Army and Government to her underwear in case she was searched.  But underneath it all, the author has managed to portray what really is the heart of Josephine Baker:  her impassioned belief that all people, no matter what ethnicity they were, could live together in harmony.  Her wartime work, her early support of Martin Luther King Jr. and her rainbow tribe all echo the fact that Josephine Baker believed humanity was capable of overcoming racism.

The wonderful thing about this book is not only its subject, a glamorous talented wealthy cosmopolitan performer, but the additional facts that the author provides to give context for the reader.  Page long side bars on everything from East St. Louis's Boxcar Town to Grace Kelly set the stage and inform the reader about important background information to help understand Josephine's life in context of the world she lived in and affected so wonderfully.

While the author doesn't whitewash any of the negative aspects of Josephine's story, including her anger and frustration at others, the other details she provides more than prove that in spite of her human failings, Josephine Baker worked hard to uphold the basic human rights of others all across the globe.