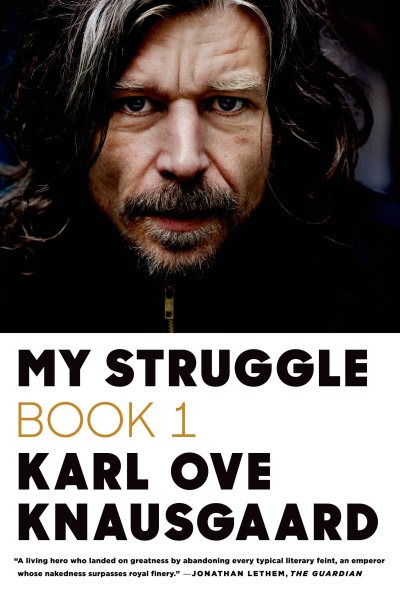 My Struggle is a very serious book; if you couldn’t guess as much from the title, you will find out from the first pages of book one, which are a reflection on death. The author returns to this theme of death—specifically the death of his father—throughout the book in seamless passages, recollections that touch on his childhood, his adolescence, and his present. In the book’s opening episode, Knausgaard is eight years old and sees a face in the sea in a news clip on TV. He runs outside to tell his dad. The way in which he describes his father’s character at that moment sets the mood for the following pages. He continues to bring up the ordinary, the undramatic memories of his dad to build a picture of him. In the haunting episode at the book’s closing, he describes what his father had become when, with his brother, he helps clean out the absolute pigsty of a house where his dad lived with their grandma for a number of years.

What could be so fantastic about the ordinary life story of a Norwegian? Knausgaard’s descriptions are so revealing, so raw and exposed, so vulnerable and honest that they are compelling to read. He lets you into his head using such minute instances as carrying a heavy suitcase across an airport terminal or staying overnight as a guest at his brother’s house. I did start to think at times: why am I reading about what this guy eats for breakfast or what he does when he’s drunk? But just as I was persuaded by his easy, natural prose into what I thought may be coming next, he would come out with a truly mind-blowing thought that was able to stir something deep inside me.

Credit is also due to the translator, Don Bartlett, who keeps the author’s rhythmic tone unstilted throughout the text. “Writing,” Knausgaard says, “is drawing the essence of what we know out of the shadows. That is what writing is about. Not what happens there, not what actions are played out there, but the there itself.”