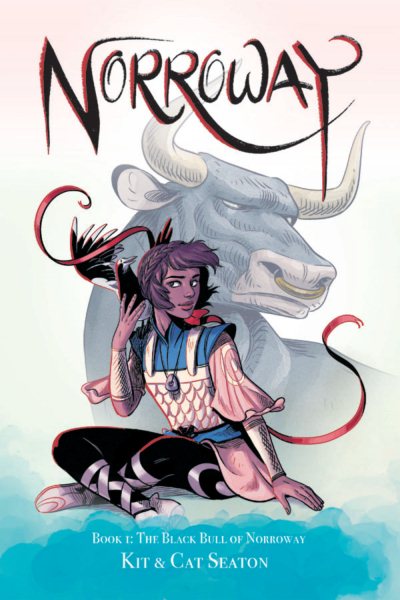 Once upon a time, a mother with three daughters decided it was time for them to marry. "Look out the back door and the first thing you see is your destiny." The first daughter sees a wealthy farmer.  The second daughters sees a fine prince.  The third daughter sees a large black bull.

So begins the fairy tale, "The Black Bull of Norroway," a variant of the Eros and Psyche tale, "East of the Sun, West of the Moon"  (and my personal favorite.) In their graphic novel, "Norroway," Kit and Cat Seaton take this basic fairy tale and flesh out the story.  In the original, there was no reason given for why the Bull does what he does. Similarly, there was no back story explaining the Bull's dilemma--was he cursed? A shape changer?  The Seaton sisters provide a back story for the Bull - known here as Bron - and why he needs the girl to be his wife. As the pair journey along, they meet the Bull's brother and sister and hints are dropped as to why Bron,now the Bull, has been cursed. Throughout the story, the girl asks the Bull a number of questions that the Bull seems hesitant to answer, so the sense of mystery and suspense is maintained throughout this first volume.

The art is top notch. The bull is a fearsome looking black bull with large dangerous horns. The facial expressions drawn for both the girl and the Bull convey as much about their personalities as the words they speak do.  The art doesn't detract from the story, it enhances it.  One of the great things about this story that originated in Northern Europe is the fact that the artist has chosen to make the main characters people of color, although I didn't really notice this until I was about halfway through the book. In addition they include a gender non-binary individual as the sea captain and the beloved of the Bull's sister.

Overall, this is a great adaptation of the fairy tale. I can't wait to see the Troll Queen and her daughters or the girl's shoes of nails in the next volume.