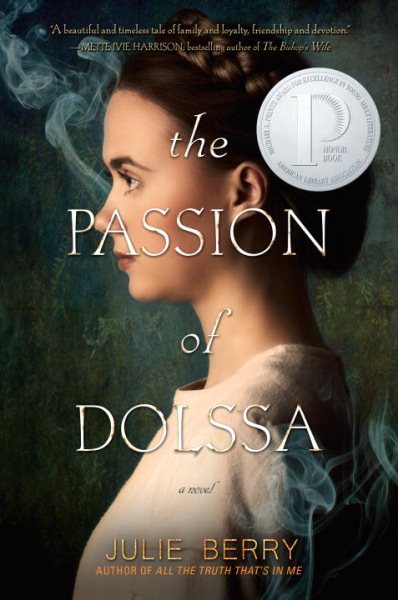 Staff Review: "The Passion of Dolssa" by Julie Berry

Dolssa de Stigata is a young noblewoman of eighteen who draws the attention of church authorities when they learn that she is telling family members and friends of the bond she shares with her beloved Lord. Sentenced to death along with her mother, she is mysteriously freed before she is to be dragged into the flames and begins a life on the run hiding from the authorities. Close to death, she is discovered in a ditch off the side of the road by Botille, a seventeen-year-old peasant girl, the middle daughter of three who run a small tavern and have carefully created a place for themselves in the seaside community of Bajas. For reasons she is at a loss to explain, Botille lies to the friar who happens by and asks her what she has found and plays along with the lie of a fellow traveler by pretending to be mentally disabled as she speaks of a dying bird and hiding the dying girl. From that moment, the fates of the two young women are bound. It’s 1241 in Provence, France, and the region has yet to recover from earlier crusades that tested familial and community ties as the inquisitors sought out heretics and those who protected, aided, and/or were followers of them. What cost will be extracted for this act of mercy? Steeped in the historical record, this fictional work is inspired by the stories of multiple female mystics and set in the time period following the brutal Albigensian Crusade in 13th century France. It’s a compelling story of two young women from very different backgrounds and their unlikely friendship that is formed in a dangerous time where dissent was actively hunted and destroyed. I found myself immersed in the world and invested in the fates of the characters as the stakes continued to rise. A list of the characters, glossary, and historical information (all of which are listed in the table of contents) is provided at the end of the book and may be helpful for readers to review before starting the main text. It’s a teen book, but teens and adults alike who enjoy historical fiction, particularly those who have an interest in the expression and repression of faith are likely to enjoy this book. The audiobook, which is available on OverDrive, is also excellent.