The Price Guide to the Occult 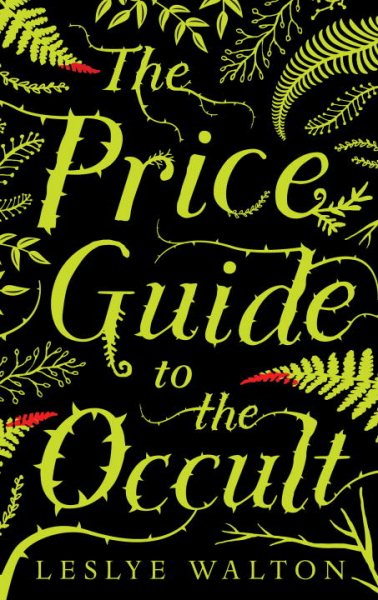 Staff Review: "The Price Guide to the Occult " by Leslye Walton

Rona Blackburn's daughters, granddaughters and great granddaughters have lived on Anathema Island for many years. Rona's powerful witchcraft has been passed down to each daughter, yet each one only inherits one of Rona's mysterious powers. Nor Blackburn wants to live a quiet unremarkable life, so when she's gifted with the ability to hear the plants, trees and animals on the island she's relieved.  Nor's mother, Fern had different ideas; she wants power. After nearly killing Nor in a spell gone bad, Fern disappears.

Now Nor lives with her grandmother and her grandmother's partner, working at the local alternative bookstore. When her mother resurfaces as the author of "The Price Guide to the Occult," Nor isn't sure what to expect. Her mother is casting spells for unsuspecting strangers and the spells seem to work. Soon her mother is on television, meeting with the president and hobnobbing with important people. Nor soon comes to realize that there is always a price to be paid for performing spells that aren't part of your gift--and the people getting spells from Fern are paying a much higher price than even they suspect, including with their lives.

I enjoyed this book for it's unique way of treating Rona's witchcraft and the effects it has on her descendants. Her presence hovers silently over the whole book. The unusual setting allows the author to use the wildlife to emphasize Fern's dangerous dabbling with power that's not her own. Nor is an unassuming teen, accompanied by her more outgoing best friend, but this doesn't overwhelm her character. She accepts her new found power and continues to live her life, just as she always has.  This coming-of-age novel describes the struggle against parents in order to assert yourself, the finding of mentors in unusual places and first love.