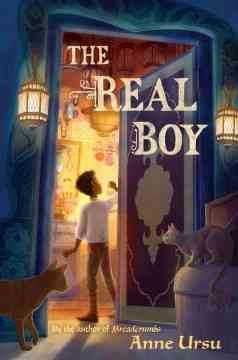 The massive walls around the protected island city of Asteri writhe with enchantment.  The wizards’ powerful magic protects the city from illness and harm.  A devastating worldwide plague many years ago killed numerous people from the island. “The boy”, Oscar, works as a lowly “Hand” for Caleb, the most powerful magician in the city. His job is to secure supplies like herbs and mushrooms from the forest, and grind them for the magician Caleb to make into healing potions.

Mysteriously, animals in the Barrow begin acting strangely, children are becoming seriously sick, and odd things are happening in the forest. With all the magicians and wizards gone, Oscar and his new-found friend, Callie are forced to team up to try to unravel this mystery.

"The Real Boy"is an intriguing, well-written story with believable characters, and enough secrets and mysterious events to keep readers engaged until the very end.  Fans of the Harry Potter series will especially like this enjoyable fantasy.  Written for tweens, all ages will enjoy this book.