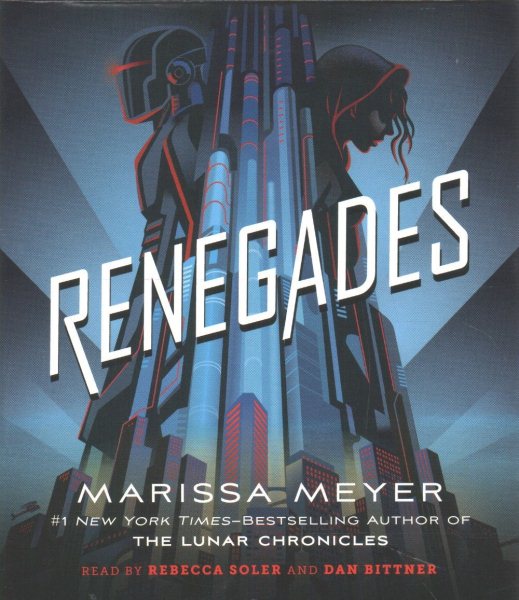 Sixteen-year-old Nova’s world is ruled by the Renegades, a group of Prodigies (humans that possess a special ability/superpower), who used their abilities to defeat Ace Anarchy and his Prodigy compatriots who were responsible for creating fear and destruction during the Age of Anarchy. Despite Renegade promises to protect them, Nova’s parents and sister were killed when Nova was just six-years-old, and her disillusion with the Renegades and her loyalty to her late uncle, Ace Anarchy, have fueled her desire to bring these “good guys” down. Allied with the surviving Anarchists, Nova plans to infiltrate the Renegade ranks and use her insider status to collect intelligence to end Renegade rule. However, once she’s accepted into their ranks, she can’t help but notice that her fellow Renegades aren’t the cartoon villains that she thought they were. Then there’s Adrian Everheart, the adopted son of two of the most illustrious Renegades and biological son of the late Lady Indomitable. Nova may not be willing to admit it, even to herself, but he’d charmed her when they’d first met—in her defense, she hadn’t realized who he was at the time—and he seems unspoiled by his fame and downright noble. Little does she know, Adrian has a big secret and an inner conflict of his own. When the time comes, is Nova prepared to take the actions necessary to protect her secret and destroy the Renegades? I thoroughly enjoyed this book, whether it was the delightful superhero/villain names (could Captain Chromium be anything but a bright, shiny, indestructible hero?), the carefully constructed world, the heart-stopping action scenes, or the emotionally conflicted two main characters. While the case could be made that this story is ultimately Nova’s journey, narrating duties are split between Nova and Adrian, who has his own heroic journey to navigate. The choice to provide divergent viewpoints on this world is a wise one as the book explores an important question—what if the definition of a hero/villain is dependent solely on one’s perspective? Fans of Marissa Meyer’s previous books and of Brandon Sanderson’s Reckoner’s series are sure to enjoy this book, along with readers who enjoy an action-packed plot, emotional stakes, and compelling characters. The audiobook is highly recommended.