Revival, Volume One: You're Among Friends 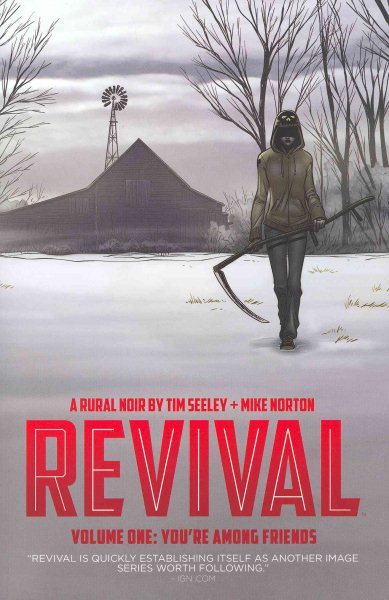 Staff Review: "Revival, Volume One: You're Among Friends" by Tim Seeley

The day is January 2 and it's the dead of winter. It seems to be just another ordinary day in Marathon County, Wisconsin, that is, until everyone who passed away on January 1 suddenly comes back to life. Soon, all of Marathon County finds itself under a strict quarantine imposed by the federal government and tensions begin to run high.

"Revival" focuses mainly on sisters Dana and Martha Cypress. Dana works for the Rothschild Police Department and is part of the newly-developed Revitalized Citizen Arbitration Team, which investigates crimes related to people who have come back to life, known as Revivers. Martha, meanwhile, is a student at UW-Marathon County who has a big secret of her own: she was murdered on January 1 and doesn't know who killed her.

This collection is the first of eight volumes in the "Revival" series and sets up a lot of questions and mysteries that pay off later. The series also features a great cast of unique supporting characters, including May Tao, a local journalist who breaks the story on the revived citizens to the rest of the world; Ibrahaim Ramin, who was sent to central Wisconsin by the Center for Disease Control to investigate the Revivers; and Blaine Abel, a snowmobile mechanic who also performs exorcisms in his spare time.

Aside from having an incredibly unique story line and featuring intriguing characters, it’s also cool to see “Revival” feature local landmarks including the Oak Island Park, UW-Marathon County campus and Granite Peak. Seeing these real-life locations incorporated into the story makes it even more engrossing and helps the story come to life, just like the Revivers.