V is for Villain 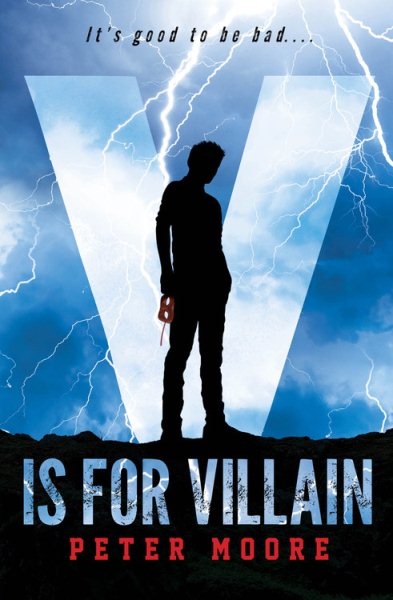 Staff Review: "V is for Villain" by Peter Moore

Brad Baron has a lot to live up to: a father who was a superhero, a brother currently on one of the most popular superhero teams and a genius mother. Enrolled at an elite school for children of superheros, Brad is a disappointment. With the exception of his genius level intelligence, he has nothing else super to recommend him: no super strength, no super speed, no flying, nothing. After being seriously injured during gym class by another student (Brad recovers, thanks to advanced surgical procedures), Brad is mortified to discover that the offending student wasn't even punished for breaking Brad's neck, and instead was given bonus points for the class. Shortly thereafter, Brad is transferred to the school within a school for students who can't make it at the regular school because they lack any superpowers. After transferring, Brad meets Layla, Javier, Boots and Peanut, all washouts from the regular school. Working together they become a team of villains, but the most astonishing changes happen to Brad when Layla reveals that he is a very powerful telepath--a superpower banned because of its potential for misuse. Brad and the rest of his crew embark upon a villainous crusade, and uncover the true genesis of supervillains, as well as some startling surprises about Brad's family.

Overall, "V is for Villain," was a fast fun read that highlighted the dark side of the superhero. As Brad and his crew slowly uncover the truth behind what's really happening, I found myself cheering for them as underdogs. The style of the book, complete with footnotes and a glossary, was very accessible and easy to read. I can definitely see teens who root for the superhero and for the underdog being excited by Brad's journey from outcast, second class citizen to villain. I was caught up within the first few pages, feeling as indignant as Brad when the other student hurts him, but doesn't get punished and as compelled as Brad to figure out just what's going on with his brother and his mom. Successfully combining the superhero/supervillain origin story with a mystery makes this a great book for all readers.